Today, freshwater scarcity is one of the most critical global challenges, possessing a major threat to economic growth, water security, and ecosystem health. Climate change and the pressures of economic development and industrialization further challenges to providing adequate and safe drinking water. The public and industrial sectors consume substantial amounts of fresh-water while producing vast quantities of wastewater. The wastewater discharged into the aquatic environment causes severe pollution that adversely impacts aquatic ecosystems and public health.

Industries like textile, chemical, tanneries, power, oil & gas, and pharmaceutical generate a large volume of wastewater. The effluent generated from these industries hasa higher amount of toxic chemicals solid waste, and organic waste that affects the environment severely. Ganga, one of the biggest rivers in India, is highly polluted because numerous industries are situated on its banks. The wastewater generated from these industries is directly released into the mainstream of the river and its tributaries. For the villages on its banks, which had not got a potable water supply connection at their home, Ganga is the only source for drinking water. People living in such villages are forced to drink the water that has toxic chemicals and compounds.

Zero liquid discharge (ZLD) – The need of the hour

Recovery and recycling of wastewater has become a growing trend in the past decade due to rising water demand. Government has come up with different initiatives to reduce the water waste by promoting to install a ZLD plant for its industry. The key driver for zero liquid discharge is a growing concern about the impact of such wastewater discharge on the environment. Such concern is resulting in increased regulation and limitation of wastewater discharges. Some organizations are also targeting ZLD for their waste because they can sell the solids that are produced or reuse them as a part of their industrial process. For example, salt is the by-product we get at the last stage of ZLD. This salt can be used in the textile process.

Zero liquid discharge (ZLD) is an aspiring wastewater technology used to reclaim the freshwater from the effluent. ZLD forestalls the risk of pollution associated with wastewater discharge and maximizes water usage efficiency, thereby striking a balance between exploitation of freshwater resources and preservation of aquatic environments. Achieving ZLD, however, is generally characterized by intensive use of energy and high cost. Therefore, ZLD has been considered where the effluent cannot be released into the environment.

We at Arvind Envisol break the barriers of operating ZLD at high energy and cost. Arvind Envisol’s “Patented Polymeric Film Evaporation Technology” is the most energy-efficient ZLD technology in the industry.

PFET is an energy recovery evaporator which compresses a low-pressure vapor and produces a low volume of vapor with high pressure and temperature. In PFET, influent is heated with steam which in turn produces a compressed vapor and it is sent back to a heat exchanger. In the heat exchanger, it gets condensed and we get pure water at its outlet. PFET has numerous advantages over conventional MVR. Below infographic shows how it is better. 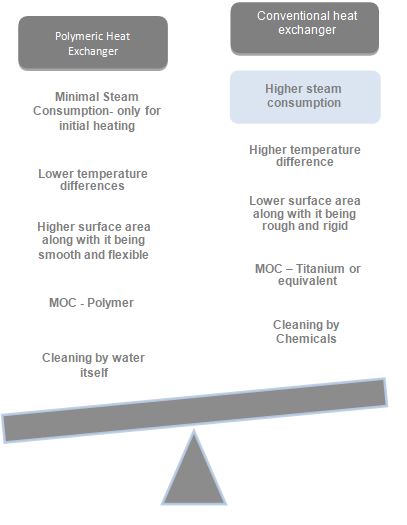 Using PFET in your plant

Generally, Zero liquid discharge is attained by feeding the higher TDS effluent to Multi-effect evaporator (MEE). However, in case of higher capacities using MEE directly after RO will impose a higher capital investment and operating cost as well. MEE requires a higher amount of steam. In such cases, incorporating PFET between RO and MEE will reduce the operating cost of the plant drastically. After RO effluent is fed into MVRE to remove high volatile compounds which were not removed in the previous process. In this process water recovered is approximately 80%. 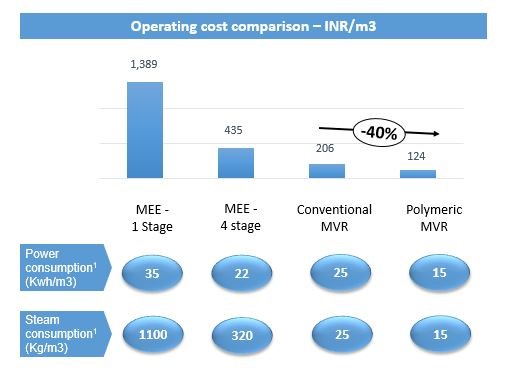